The Hall, Park, and McCullough families who once lived in what is now known as the Park-McCullough House, influenced both Vermont and United States history during the Victorian era, beginning with the Gold Rush. Members of this family were involved in politics, both in Vermont and California, with Hiland Hall and John McCullough ultimately serving as Governors of Vermont. McCullough and his father-in-law, Trenor Park, who built the house in 1865, played a significant role in the development of the railroads and were in the forefront of negotiations over the building of the Panama Canal. Correspondence and records kept by family members, as well as detailed letters and diary entries of John McCullough’s wife, Eliza Hall Park McCullough (Lizzie), document not just historic events, but the family’s Victorian way of life. 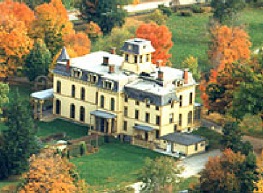 The Park-McCullough House is one of the finest, most significant, and best Preserved Victorian Mansions in New England. Built in 1864-65 by attorney and entrepreneur Trenor Park (1823-1882), the house was designed by Henry Dudley, a prolific New York architect of the popular firm of Diaper and Dudley. It is an important example of a country house in the Second Empire Style and incorporates architectural features of the Romantic Revival style that were popular at the time. The house retains to a great extent the integrity and impact of its original design. 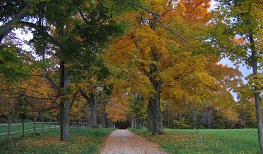 Trenor Park laid out a path through these woods in 1865 – a mile around – for the walk he took daily for his health.

Ethel McCullough Scott, his great-granddaughter, and her husband Bill Scott donated the 96 acre parcel to the Fund for North Bennington in 1994. The property had been in Mrs. Scott’s family for more than 200 years. The Woods feature rich stands of old timber, several trails, including Trenor Park’s original path, and a circular carriage road laid out after the Civil War by Trenor Park. 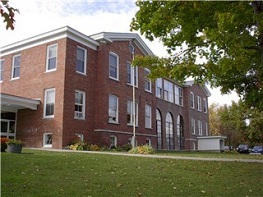 The Hall and Park families were instrumental in the construction of the school in 1870. They gave the land and landscaping, and paid for the foundation.

North Bennington Graded School was established in 1870 and has served the village of North Bennington continuously for over 130 years. Originally serving a kindergarten through high school population, it became an elementary school with the opening of the Mount Anthony Union High School in the 1960s. The school was completely renovated from 1997 through 1999, and now stands ready to serve the students of North Bennington for the foreseeable future! Second and third generation students are quite common and there are even some fifth generation students presently enrolled. The school is strongly supported by the local community and is often referred to as the “Heart” of North Bennington. It serves a small geographical area and has a student population that has averaged 150 students over the past 10 years. There is no busing in the village; students walk, ride bicycles, or are driven by parents to school. It is common, on a daily basis, to see many parents around and about the school. 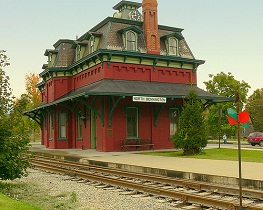 In 1880 Trenor Park, who had controlling interest in the railroad, urged the village to build a new station. The style, Second French Empire, with its mansard roof and decorative cut shingles was very popular at the time. The tower roof was taken down in the 1930’s. By the 1970’s passenger train service to N. Bennington had stopped and the building was in sad neglect. With the support of the Scotts, descendants of the Parks, the station was restored in 1972 and is now used for public gatherings in the village

The John G. McCullough Free Library was built in 1920-21 by Eliza Hall Park McCullough in memory of her husband, John G. McCullough, a former governor of Vermont, legislator, and businessman. The two-story brick building, designed by New York architect J. Lawrence Aspinwall of the firm Renwick, Aspinwall & Tucker, was a gift to the community and has served as a hub of village activities for more than eight decades. 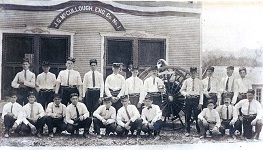 In 1880 John McCullough bought and remodeled the black smith shop on the edge of Lincoln Square to be the fire house after several disastrous fires in the village. The stylish cut shingles and arched doors show us this was a symbol of civic pride.

1n 1965, the grandson of John McCullough, also named John McCullough, provided architectural services for the construction of a new fire station across the street. Both stations were built with assembly rooms for the Village on the second floor.

The North Bennington Fire Department was organized and Incorporated in 1834 making it the oldest active volunteer department in the state.

Trenor Park founded the bank in 1866 as the First National Bank. Built in the commercial version of the Italianate style, it housed the village post office on the first floor and a public meeting room on the second. 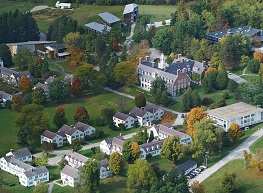 Bennington College is a private liberal arts college in Bennington, Vermont. Founded in 1932 as a women’s college, it became co-educational in 1969. It claims to be the first college to include visual and performing arts as an equal partner in the liberal arts curriculum. 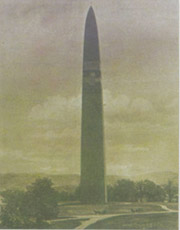 A group wishing to commemorate the Battle of Bennington decided a monument should be erected at the storage site of the military supplies which had been the objective of the battle. In 1876, the Vermont General Assembly passed an act establishing the Bennington Battle Monument Association as an outgrowth of the Bennington Historical Society. 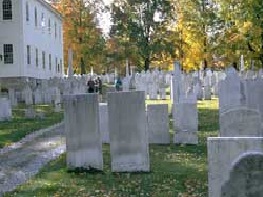 At the Old First Church in Bennington… 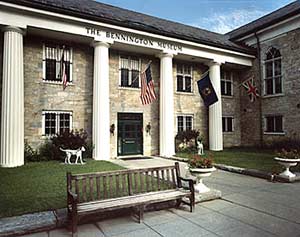 The Bennington Museum was founded as the Bennington Historical Association in 1852 to celebrate Bennington’s Colonial past and, more specifically, to commemorate the historic Revolutionary War Battle of Bennington in 1777.

When wealthy North Bennington resident Trenor Park purchased the Bennington-Rutland Railroad, he found that the railroad “barons” of the Troy and Boston Railroad refused him access to their New York lines. Rather than fight this monopoly, Park built a rail line from Bennington to Lebanon Springs, NY, where he could transfer his trains to southbound rails while bypassing Troy. The dozens of tight turns over 40 miles of hilly terrain gave this stretch of railroad the name “Corkscrew.” Passenger service was canceled in 1931 and the line was officially abandoned in 1953. Remnants of the old rail bed can be seen where it crossed the highway at this point. 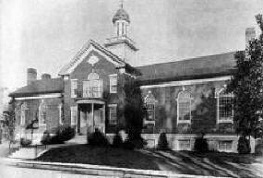 The Bennington Free Library was established in 1865 by Trenor W. Park and Seth B. Hunt, on the corner of Main and Silver Streets in Bennington. Originally no more than a room on the second floor fitted up as a library the library was run by the Young Men’s Association, established in 1865. In the Fall of 1892, the location being judged too small and dimly lighted, library operations were moved downstairs and expanded to three rooms, including a library proper and two smaller rooms. Over time the Bennington Community outgrew its small library and in 1936 a new library was constructed adjacent to the original. Given in memory of Trenor W. Park by his son, Trenor L. Park, the new library was built on the Park family homestead. The architect for the new library was Herbert Turner, a descendant of the original donor, Trenor Park.

The Luther Park homestead was relocated to West Road, N. Bennington, behind the Park-McCullough mansion.