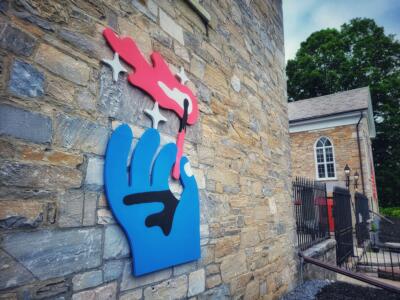 Born out of a variety of media, my ever-growing cast of characters walk a line between whimsical and weird. Simplified figures and personified objects often use wry humor and irony to give charm to their ordinary worlds. Lucky Strike freezes a moment that is seldom captured and often unnoticed. Like much of my work, this piece was foraged from the unremarkable events and circumstances of routine daily life, in this case offering the viewer a dazzling treasure found in the microseconds of a rather unmemorable action. Oversized and coated with color, Lucky Strike allows an otherwise nearly-invisible display to receive the visibility it deserves.

ARTIST BIO:
Graduating with a Bachelor of Fine Arts degree from the University of Vermont in 2013, Jackson Tupper has since juggled his fine art practice with a career in graphic design and illustration. From solo gallery shows and group exhibitions to music festival installations, he has shown his work across Vermont and beyond in a variety of media. As a member of the Iskra Print Collective in Burlington, Jackson volunteers as both a teaching assistant for screen printing studio classes and as a production printer for commercial jobs, while also using the space to focus on his own concentration of screen printed art. Currently, Jackson works at Burton Snowboards as a designer of snowboard graphics while casually pushing a freelance illustration career after hours.